The prices we mention change faster than we can keep up. They are a guide to figure about how much transportation will cost.

​The bus will arrive in Las Terrenas at the crossroads of Calle Principal and Boulevard del Atlantico (near Esso Station). From there you will need to take a fifteen minute taxi  or motorbike taxi ride to MONTE PLACIDO. 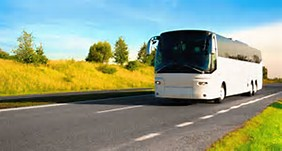 Stay on for Monte Placido.

​If you choose a bus time that is highlighted and underlined*, DO NOT GET OFF IN LAS TERRENAS. STAY ON THE BUS. Tell the driver to stop in La Barbacoa at Calle Luna / Costa Mar. The stop is very close to Monte Placido and we will meet you. Look at the picture to know what this stop looks like, so you know where to get off the bus in La Barbacoa, or to tell your taxi where to turn right. It is wise to call Transporte Las Terrenas to make a reservation: Las Terrenas 809 240 5302. Santo Domingo 809 687 1470. You can also reserve directly with the bus driver, the number is in parenthesis by the time. 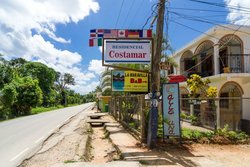 LAS TERRENAS TO PUNTA CANA - 1) Transporte Las Terrenas 2) Expreso Bavaro
​Price: $400RD Expreso Bavaro + $350RD Las Terrenas + $300RD Taxi in SD
​This becomes a little complicated. You will take the Las Terrenas to Santo Domingo bus and get off at the first stop on the Highway as if you are going to Las Americas Airport. From there you will need to take a taxi. Expreso Bavaro is picked up just off the Avenida Maximo Gomez on Juan Sanchez Ramirez #31 about a half a block from the Supermercado Nacional.
Departure: 7am - 9am - 11am - 1pm - 3pm - 4pm  Times are the same as in Bavaro. Reservation  809-682-9670.
​Expreso Bavaro is the only EXPRESS bus to Punta Cana. It is a large luxury bus and can be chilly with the air-conditioning.

We can help you arrange taxi transfer to Monte Placido. We have a very reliable and trusted driver that will pick you up at any time. If you choose to find your own taxi be sure to take the DRIVING DIRECTIONS to help the taxi find us as they will have no idea where we are located and will not have GPS.

​​Uber is available in Santo Domingo and on their website you can sign up to ride ONE WAY from Las Americas Airport to Las Terrenas for a minimum of $70 - $100 dollars, however when the Uber driver arrives he will want at the very least $165 dollars . Consider this, even though you are going one way it is a round trip for the taxi. Driver expense round trip: tolls = $48 dollars, gas ($5 dollars a gallon) = $65 dollars, plus 5 hours of driving time ($10 dollars an hour) = $50 dollars. Total = $163. Below are approximate realistic costs in US dollars for a taxi that can hold four adult passengers or two adults and three children. The prices below are ONE WAY and subject to confirmation depending on arrival time and availability of driver and number of passengers .

Coming from Punta Cana and Bavaro  resort areas you can travel to Sabana del Mar on the south side of Samana Bay and and take a Ferry across to Samana. From the harbor in Samana you will need to take a 40 minute taxi ride to Monte Placido, cost about $75 dollars.
​
SCHEDULES ARE SUBJECT TO CHANGE - Call Transporte Maritimo  809 538 2556
​Price: $225RD
​From Sabana del Mar to Samana
​Departure: 8am,11am, and 3pm (5pm maybe). The boat ride is a little over an hour.
From Samana to Sabana del Mar
Departure: 7am, 9am, 11am, and 3pm.

Options for getting from Punta Cana / Bavaro to Sabana del Mar 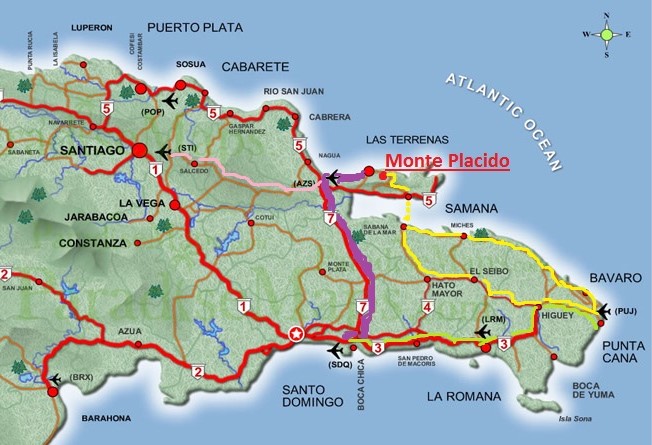